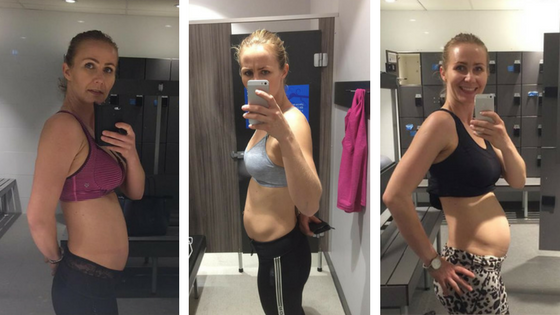 I won’t hide that this pregnancy was a total surprise. First when I found out about it, I panicked! I worried about what would happen to my pelvic floor and my prolapse. So as soon as my GP confirmed the pregnancy, I went to see a women’s health physio straightaway. I’ve already felt the difference in my pelvic floor (which was probably more due to hormones as my pelvic floor got better and I didn’t do anything special), and I was freaking out. To my relief, when I saw the women’s health physio, she said that my pelvic floor is strong, that prolapse is hardly visible, and that everything is fine. I also checked with her to see if she thinks I can have a vaginal birth, and she said that at this stage everything looks great and vaginal birth shouldn’t be an issue (which was also confirmed by an obstetrician).

Just to explain, I don’t have anything against C-section. And I think that there is no better or worse way to give birth, it doesn’t matter how your baby comes to this world, as long as BOTH mum and baby are okay. Any birth is a “normal birth”, and C-section is not the easier way. People forget that it’s a major operation. But as my pelvic floor has already been compromised, I prefer to have a vaginal birth again, instead having a C-section and compromising my abdominal wall.

I have to say that having the good news from the physio helped mentally adjust to the new situation and to the thought that soon we are going to be a family of four, not three. Saying that, I still have moments of anxiety and panic about how we are going to cope with two kids away from the family. And adjusting to this pregnancy mentally wasn’t easy.

My first pregnancy was quite easy. I felt exhausted in the first trimester but nothing compared to this time round! Probably having a toddler to look after didn’t really help ;). I also got sick with a bad cold and I couldn’t shake it off for about four to six weeks. I was sick, exhausted, and I still had to look after the toddler and run my business (other things didn’t really count that much around that time 😉 ). I felt miserable. All of that probably didn’t help my mental health either. I have to admit that my hormones and mood swings were all over the place, and I had no patience (especially when it came to my boys…both of them).

I kept training during my first trimester. However, as soon I found out I was pregnant I stopped any high-impact exercises (like running, jumping, or skipping), and I also dropped weights and increased the number of reps I was performing. I prefer to be safe than sorry and keep my pelvic floor strong during the pregnancy. Plus my goals have changed; I don’t train anymore to get fitter or stronger. I just want to stay fit, active, and strong during my pregnancy to cope with “mum life”, to have better recovery post-birth, and to feel good. I’ve still kept doing Muay Thai, I just adjusted the intensity. No more skipping or fast kicks, and I need more rest between the rounds (it felt like my fitness level dropped straightaway).

Does it mean that you, too, have to adjust your workout program the same way? Not at all. Every pregnancy is different. I would highly recommend seeing the women’s health physio at some point of your pregnancy, though, especially if you can feel changes in your pelvic floor, and stop high-impact exercises after 20 weeks (or even earlier if you can feel any weakness in your pelvic floor).

During my first pregnancy I made hardly any changes to my training till my third trimester. I was one of these “fit mums” who either go hard or go home. I kept teaching pump classes with the same weight as before being pregnant till it was hard for me to talk during the classes, and I realized that I probably needed to lower my weight. Did my training during my first pregnancy contribute to my prolapse? I don’t know, maybe no and maybe yes. But I know that being pregnant, giving birth, heavy lifting, coughing, and high-impact exercises increase chance of prolapse, so with that education I’m trying to reduce any risk this time round. I know that I can control my pelvic floor much better with weights than with quick, bouncy exercises. I still have to run after my toddler though ;).

I will be honest. My diet wasn’t the greatest. During the first trimester I was hungry almost 24/7! And it wasn’t normal hunger. I felt like I was starving like I didn’t eat for hours and I could eat anything that was in front of me (that’s when people first started telling me that it might be a girl). So I had to make sure that I had lots of snack with me all the time. Due to food safety while pregnant, the easiest and healthiest thing I could carry around with me was fruit, and I was eating a lot of it! Luckily it was a good time of the year and many fruits were in season. As I couldn’t stand protein in the evening, my favorite dish for dinner was a fruit salad (oh yes, I ate fruit 24/7). And I loved sandwiches. Fruit and bread, that’s what was on my menu!

With Liam it was bit different; I didn’t really feel like eating at all during the first trimester (just very plain foods, mostly bread 😉 ). I felt nauseous pretty much all day (this time mostly in the evening). I went off chicken (and other proteins, too, but didn’t like chicken through my whole pregnancy). This time round I’m definitely eating more and I have a weakness for sweets ;). But do I feel guilty about it? Not really! I try to enjoy all these foods while I can. I still try to eat healthy, but my body also needs extra calories. If they come from the chocolate, I’m ok with that ;).

Having said that, accepting changes to my body and my muscles was also harder this time round. But I will leave that for the second part of the blog ;).